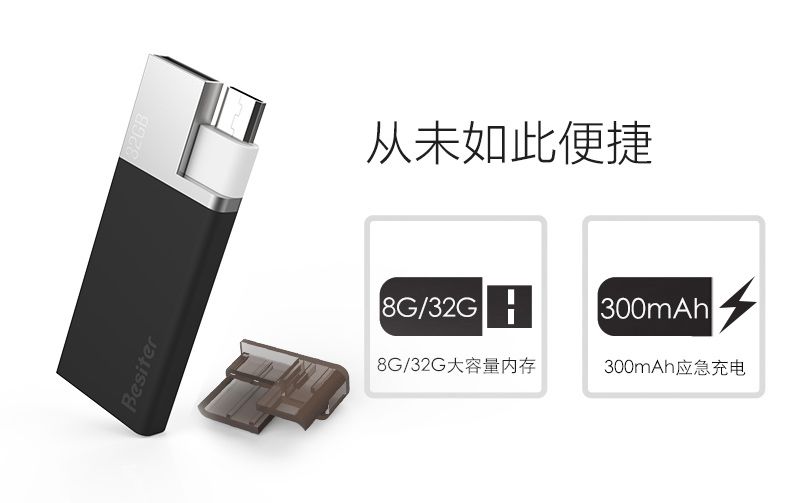 The Besiter U Disk is a 2 in 1 micro USB flash drive and power bank from a company in China known for their range of affordable power banks.

The U Disk comes with either 8GB or 32GB flash storage that can connect to any device with the micro USB port. A micro USB to lightning adapter will be required if you want to use it with an iPhone or iPad. The U Disk comes with a full sized USB for charging the power bank and transferring files onto it from a computer. The Besiter U Disk also features an inbuilt 350mAh power bank for emergencies. While it won’t charge your phone significantly, it’ll give it enough juice to turn on or make an emergency call.

While Besiter isn’t the first company to release a small power bank, it’s one of the first to make a more functional power bank with an attractive design. A lot of companies currently sell credit card sized power banks with an average capacity of 2500mAh on sites like Aliexpress.

Several years ago Devotech had their Fuel power bank successfully backed on Kickstarter with a capacity of 220mAh. Unfortunately the design meant that the phone could not be charged sitting flat and it came with an expensive price tag of $24.99 US. Fortunately this isn’t a problem for the Besiter U Disk due to the rectangular design and the bendable micro USB.

Currently the Besiter U Disk is only available in China and the 8GB version sells for ¥58.00 (~ $9 US) while the 32GB version sells for ¥98.00 (~ $15 US). It will likely sell for twice the price if it’s released outside of China. Besiter are also accepting custom designs on the flash drive too, so it could end up being rebranded and sold by other companies.