SUNMI OS is an Android-based OS for Point of Sale

In 2016 a new technology company called Sunmi was founded to create an Android-based operating system for use with Point Of Sales systems. With two rounds of funding from Xiaomi this new OS was called SUNMI OS. Since then the company have released a dozen products based around this new operating system that have been very popular.

At it’s core the operating system is currently based off Android 7.1 Nougat with previous versions based on Android 5.1 Lollipop. It features a near stock interface with several UI changes that make it suitable for use with POS systems. It also receives frequent OS and security updates through the OTA update app.

To make everything easy Sunmi have setup a Cloud Portal for managing the operating system. This includes remote management of the device, pushing out updates, customization and permissions. The cloud interface also features statistics on the device including payments made and how much data has been used on the device.

The OS itself comes with the basic Android apps and apps designed specifically for the POS. Additional apps can be installed by Sunmi’s own App Market, Google Play or sideloading. What’s interesting about Sunmi’s App Market is that it can be customised to download only specific apps that you specify. The reasoning for this is that if it’s used in a business, employees cannot install games on it. 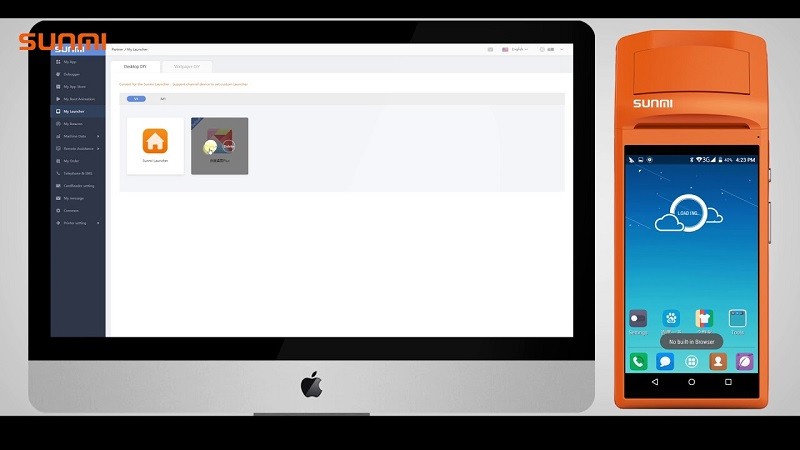 Another remarkable feature is that the desktop icons, wallpaper, widgets, boot animation and the ability to choose which app starts up first can be all controlled from the Cloud interface. This allows you to setup customise how it looks easily and is perfect for setting up multiple devices at once.

To simplify it even more the OS has native support for dual screens, thermal printers, cash drawers and scanners. It also supports a wide range of payment options including magnetic stripe cards, Tap and Pay, QR Codes, NFC, RFID and MIFARE.

SUNMI OS is only available for products released by Sunmi. More information is available at the official website.